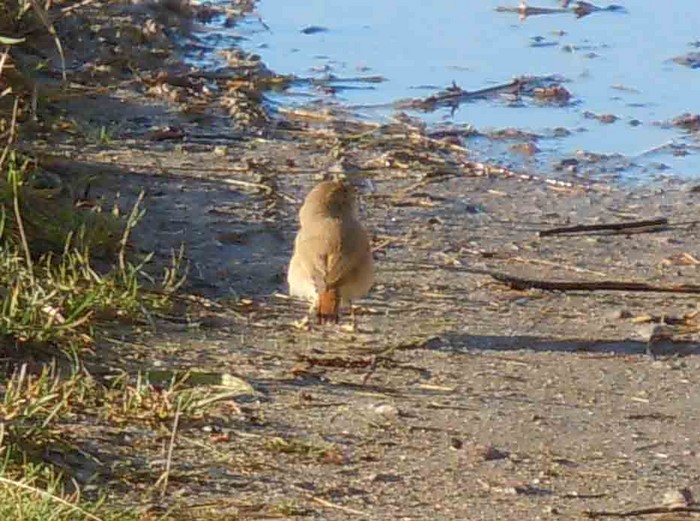 This week was dominated by a calm and mild southerly airflow. Unsurprisingly, this brief ‘window of opportunity’ revived the autumn somewhat and produced a tiny scattering of typical late autumn scarce passerines. There were also, as might be expected, one or two eastern rarities, the best being an Asian Desert Warbler but, more predictably, there was also a Desert Wheatear . Otherwise, the story was increasingly one of a steady descent into winter. When the bird listings are dominated by wildfowl and Waxwings, you know winter is on its way!

The Asian Desert Warbler was seen briefly (and photographed) at Samphire Hoe Country Park, 2.5 miles WSW of Dover, Kent on the morning of 18th. This beautiful and delicate little sandy Sylvia is now a difficult species to catch up with in Britain and, with the last as long ago as 2000 (at Spurn, Yorkshire), this bird would have been highly popular if it had stayed. The 2000 bird was in spring, as was the one before that, singing and nest-building at Blakeney Point, Norfolk in 1993, but historically Asian Desert Warbler has always been a late autumn bird, with a run of eight such records between 1975 and 1992. Arrival dates for these fall between 13th October and 20th November so this week’s bird conforms neatly to the long-standing pattern. The first record of all, at Portland Dorset in 1970, presumably also arrived in this country in late autumn but was not discovered until 16th December. As might be expected, all records have come from the east and south coasts apart from the famous long-staying bird at Meols, Cheshire and Wirral in October/November 1979. The Samphire Hoe bird is the second for Kent, following a bird at Seasalter in November 1991.

Somewhat overshadowed on 18th was another desert rarity from Central Asia - a male Desert Wheatear, also in Kent, at Harty Marshes, Sheppey. Though now an expected ‘last autumn vagrant of all’, this is still an exciting discovery and of course a very attractive species too. This was the 12th record for Kent.

Arguably the most exciting and charismatic rarity of the week, however, was the gorgeous white Gyrfalcon found (and photographed) sitting on a rock at Bornish, South Uist on 18th. It didn’t linger but it did manage to fly through the observer’s garden before it left. This bird was doubtless the more surprising for appearing outside the traditional March/April ‘slot’ but the location was about as traditional as it gets.

A few birds from the autumn lingered into this week, most notably the surprisingly hardy (or confused) Eastern Olivaceous Warbler at Kilminning, Fife. Though now reported more erratically (anyone who wants to see it will surely have done so by now) it was still present and correct on 20th. A blast of hard weather will no doubt kill it or move it on but if mild conditions persist it will be fascinating to see how long it remains. This would be a bizarre bird indeed for Christmas, let alone a New Year’s Day list! Before this bird, only two Eastern Olivaceous Warblers - the memorable duo on St. Mary’s, Isles of Scilly in 1984 and 1985 - had lingered even as late as the second half of October.

Also lingering was last week’s new Buff-bellied Pipit between Ballykinler Beach and Tyrella Beach at Corbett’s Beach, Down, still present along its favoured stretch of coast until 18th when, astonishingly, it was joined by another one, though only one was present next day. Late arriving and wintering are not unprecedented in this species so it will be interesting to see how long this bird now remains. Buff-bellied Pipit has seen a meteoric rise to prominence this century, with only six records prior to 2000, since when (to 2010) a further 17 have reached Britain and 13 more reaching Ireland. Could this species one day rival or overtake Red-eyed Vireo as the commonest transatlantic passerine? It has a long way to go but watch this space! Intriguingly, however, the prize for spotting Britain’s first Siberian Buff-bellied Pipit remains unclaimed. There lies a suitable challenge for someone!

Finally, bringing up the rear in the list of autumn ‘hangovers’ is the still remarkable number of Hornemann’s Arctic Redpolls on Unst, Shetland, reaching 7 on 19th, 4 at Baltasound and 3 at Uyeasound. In the light of my comments last week, could these be potential winterers? There is no precedent for this of course, and it’s doubtless unlikely, but it will be interesting to see what these birds do. Hornemann’s Arctic Redpolls are typically seen in late September/early October before fading away to who knows where. Mid-November birds are exceptional so we are in uncharted waters with these.

The Continent dished up a few tasty morsels this week, the best by far being a superb Cliff Swallow on Oland, Sweden from 15th to 20th when, tragically, it was taken by a Sparrowhawk. On at least 17th to 19th a Naumann’s Thrush was in Estonia, whilst in Denmark the Brown Shrike was still present. The Pine Grosbeak trail seems to have gone predictably cold, however…

Otherwise, the only herons news was a Cattle Egret on the Axe Estuary, Devon from 16th, whilst the only Glossy Ibis reported was the long-staying bird at Marloes Mere, Pembrokeshire, still there to at least 17th. 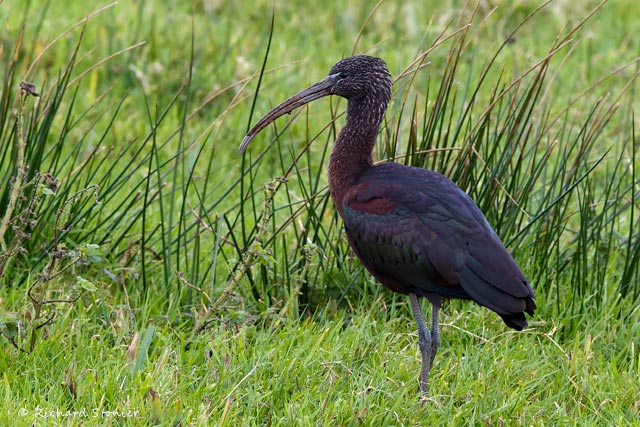 Wildfowl dominated the news all week, most notably a rash of new Richardson’s Canada Geese . In addition to the 2 on Islay, Argyll, others were found on Berneray, Western Isles, Loaningfoot, Dumfries and Galloway and 3 at Ballyconnel, Sligo. 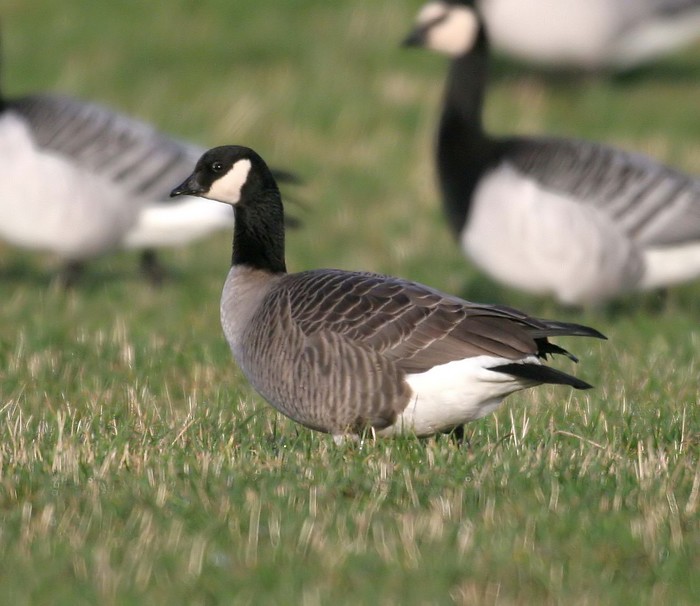 Also with Brents, Black Brants were more in evidence this week, though mainly on the south coast. Siberian Brants were at Ferrybridge, Dorset, Portsmouth, Hampshire and Pagham and Fishbourne, Sussex, whilst a Canadian Brant was at Sandy Bay, Kerry.

To complete the goose line-up, the suspect Ross’s Goose was still with its suspect Barnacle Geese and not at all suspect Pink-footed Geese around Haddiscoe, Norfolk.

Heading up this week’s ducks was the first-winter female Hooded Merganser at Pagham, Sussex, present till 17th when it was seen to fly off strongly to the northwest. 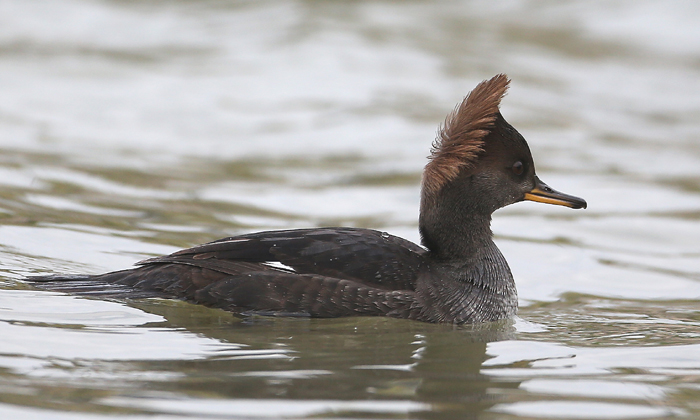 More Green-winged Teals were found this week - at Tiree, Argyll, Caerlaverock, Dumfries and Galloway, Martin Mere, Lancashire, Hodbarrow Cumbria, Loch of Strathbeg, Aberdeenshire and, to add to the site’s impressive list of rarities (again), at Tacumshin, Wexford. The drake American Wigeon was also still at Angler’s Country Park, Yorkshire and another was still at St. John’s Loch. Highland.

Finally, Surf Scoters were off Llandulas, Conwy (up to 4), Brandon Bay, Kerry (2), Glenbeigh, also Kerry and, more unusually, a juvenile was on the sea with Common Scoters and a Velvet Scoter between Sheringham and Weybourne, Norfolk on 17th.

Little raptor news this week. This is clearly not going to be a good winter for Rough-legged Buzzards , the only ones reported being at Holkham Freshmarsh, Norfolk on 14th and Roughton, also Norfolk, next day and, on 17th, at Gibraltar Point and South Somercotes, both Lincolnshire. Meanwhile the juvenile female Northern Harrier was still at Tacumshin, Wexford to at least 18th. 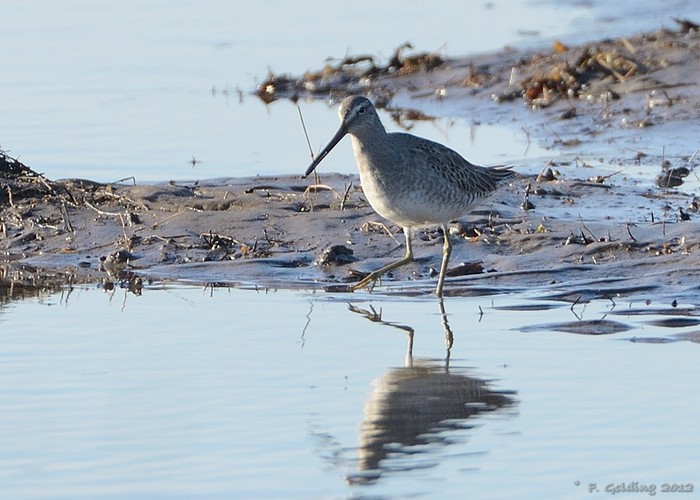 A scatter of American Golden Plovers also appeared - a single at Anthorn, Cumbria on 17th and another at Tacumshin, Wexford, also on 17th, to join the one already there and then, amazingly, a flock of 4 at Myroe Levels, Derry on 18th with at least one still present to 20th.

The best gull of the week was the reappearing Bonaparte’s Gull at Dawlish Warren, Devon on 17th and 18th. Otherwise there was just a scatter of Glaucous Gulls in Kent, Lincolnshire, Gwynedd, Leicestershire, Nottinghamshire, Argyll, Yorkshire, Highland, Orkney, Shetland, Wexford, Cornwall and Antrim. Iceland Gulls were at Drift Reservoir, Cornwall, Filey, Yorkshire and Islay, Argyll on 14th, Fair Isle, Shetland on 16th, Westray, Orkney on 17th, Ayr, Ayrshire on 18th to 20th at least and Great Livermere, Suffolk and Lewis, Western Isles (2) on 20th. Much less seasonal, however, was a young Long-tailed Skua off Berry Head, Devon on 20th. 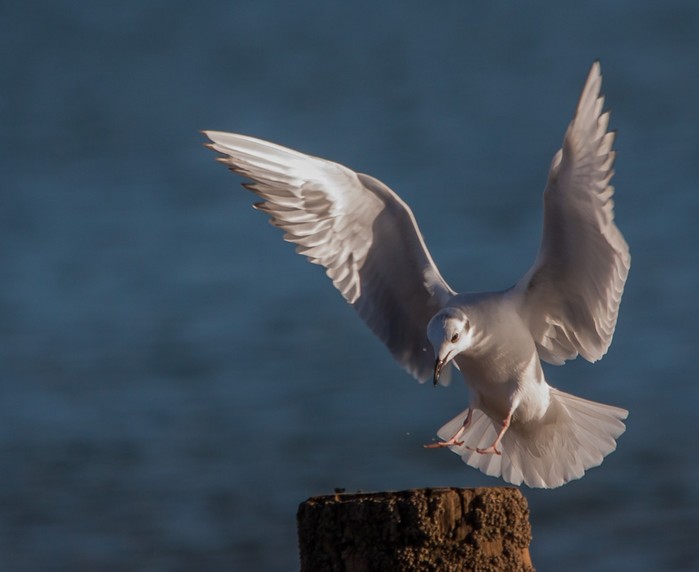 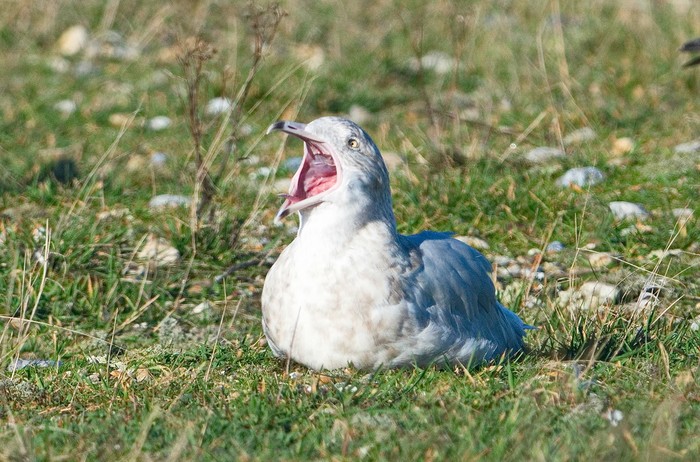 Lingering Ring-billed Gulls were still at Groomsport, Down, Timoleague, Cork and Gosport, Hampshire, whilst the Sabine’s Gull was still at Cobh, Cork to at least 17th. 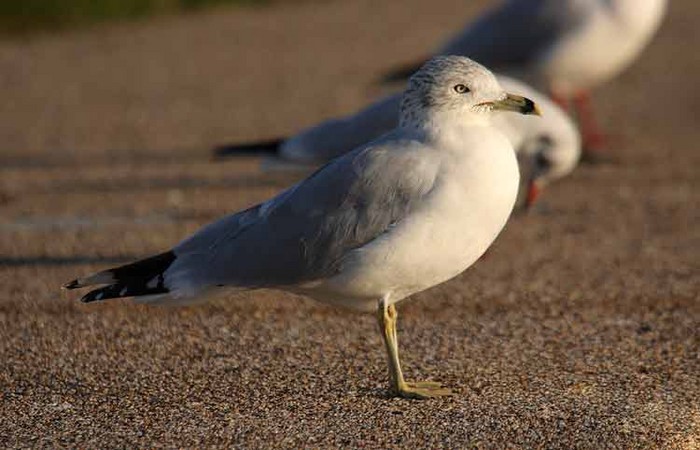 The ‘mini-revival’ of autumn produced 3 Pallas’s Warblers in what has been a pretty poor autumn for this normally much-anticipated bird - at Portland, Dorset on 14th, Dungeness, Kent from 14th to 17th and Kingsdown, also Kent, on 17th. Portland’s Dusky Warbler also stayed to 14th and a Hoopoe was there on 15th whilst there was a new Dusky Warbler at Winspit, Dorset on 18th. Also amongst the week’s rarer passerines was a Subalpine Warbler in St. Just, Cornwall, initially proving elusive but finally confirmed as a Subalpine on 20th. 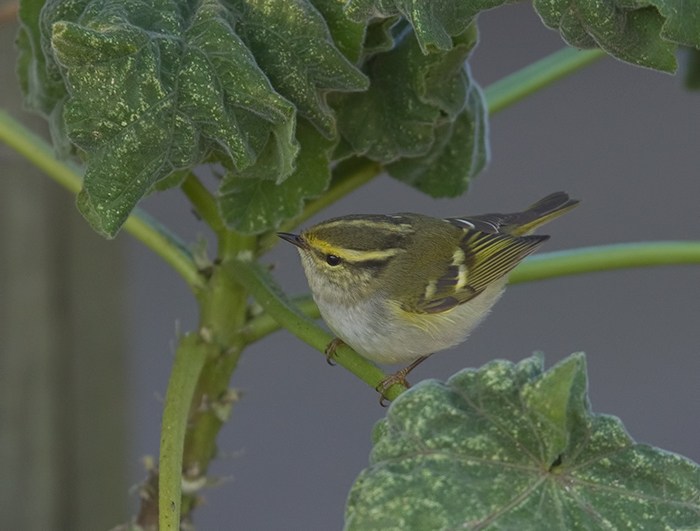 A few late Yellow-browed Warblers also popped up, with singles at Marloes Mere, Pembrokeshire on 14th, Spurn, Yorkshire and Penryn, Cornwall on 15th and 16th, Ventnor, Isle of Wight on 16th, Swanage, Dorset on 17th and 18th, Oldbury, Gloucestershire on 17th to 19th, Helston Loe Pool, Cornwall on 18th and St. Mary’s, Isles of Scilly on 20th. 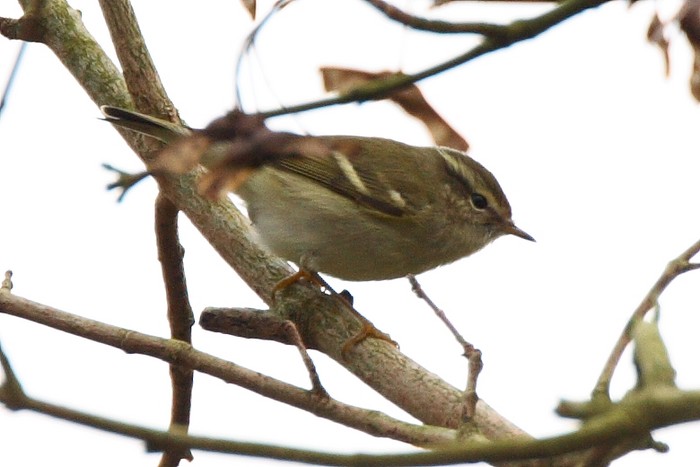 Siberian Chiffchaffs were at Cley, Norfolk on 14th, Tacumshin, Wexford on 16th, with 2 there next day, and 4 on St. Mary’s, Isles of Scilly on 14th. More unusually, a Red-breasted Flycatcher was also reported in Cley on 14th.

Richard’s Pipits also put in a better showing this week - singles at Rhoscolyn, Anglesey on 15th, Tacumshin, Wexford on 16th to 17th and Snettisham, Norfolk and Calshot, Hampshire (2) on 17th (with one to 18th), Sheringham, Norfolk on 17th to 18th and Fawley, Hampshire and Flamborough Head, Yorkshire on 18th.

The Barred Warbler was still at Kilminning, Fife to 14th but not reported subsequently so has presumably now abandoned its Eastern Olivaceous Warbler friend. New birds were at Reculver Kent on 14th to 15th and on Tiree, Argyll on 16th.

And now for winter birds.... Sure enough, the Black-bellied Dipper popped up again at Thetford, Norfolk on 15th and 16th though not on other days. Erratic and unpredictable appearances are, of course, typical so would-be observers of this bird can no doubt expect further frustration, long waits and wasted visits. 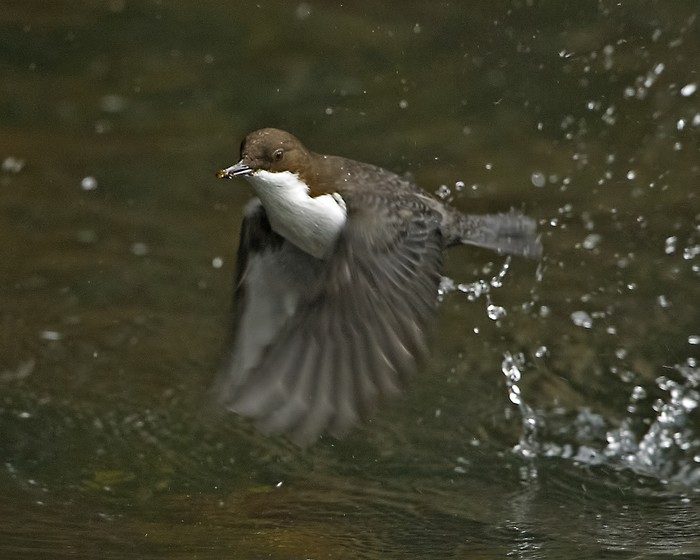 The weather forecast for at least the first half of next week is dominated by westerlies though a return to easterlies seems possible by the weekend. Whether it’s now too late for a last major rarity remains to be seen, however. Mark will be back next week though so you’ll read it here first.

A Wildcat kitten found freezing to death in the Huntly's Cave area north of Grantown has been rescued and taken into care. More here >