A paper in Proceedings of the Royal Society B says that mercury levels in arctic Ivory Gulls have risen almost 50 fold over the last 130 years. Scientists think this increase in mercury pollutants could be to blame for plummeting population figures. 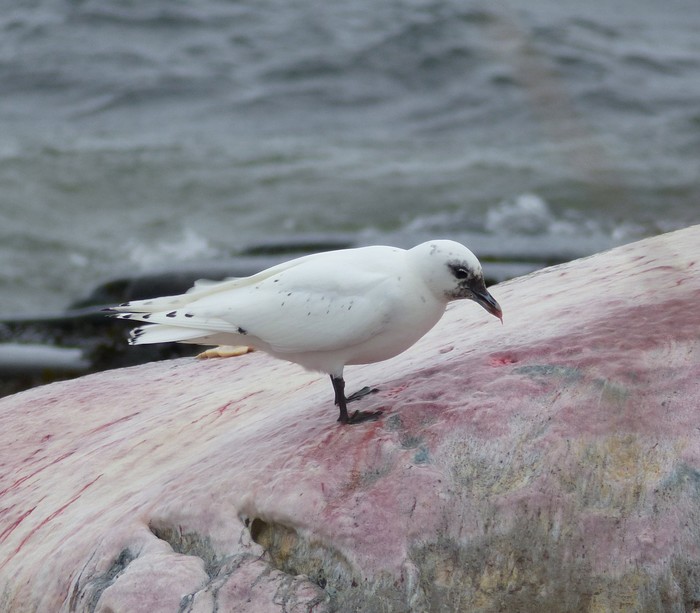 Since the 1980s populations of Ivory Gulls in Canada have nosedived by more than 80%. In Canada the species is now endangered with only 400-500 breeding pairs left. The reason for the drastic decline in the population is unclear but scientists think there could be a link to mercury pollution. A study in 2004 found that the eggs of Ivory Gulls have the highest concentration of mercury of any arctic seabird.

Using museum specimens, the scientists tested the concentration of mercury in the feathers of 80 Ivory Gulls that lived over the last 130 years. Mercury in the body of birds builds up in feathers when it is trapped and stabilised by processes which produce keratin which feathers, claws and hair are made of.

The team found 45 times more mercury in the feathers of Ivory Gulls from 2007 than those from the 1877s. As well as eating fish, Ivory Gulls are also known to scavenge blubber and meat from marine mammal carcasses and may be consuming high concentrations of mercury from these apex predators at the top of the food chain where pollutants tend to accumulate.

The researchers tested stable isotopes of carbon and nitrogen in the feathers to determine whether a change in the diet of the Ivory Gulls in Canada could account for the huge increase in mercury consumption. They found no evidence of a dietary change that could explain the increase in mercury they found.

‘This dramatic change in the absence of a dietary shift is clear evidence of the impact of anthropogenic mercury on this high-latitude threatened species,’ say the researchers.

Mercury consumption has been shown to have damaging effects on wildlife, affecting the breeding success of birds. The researchers conclude that increased levels of mercury in the environment is likely partly responsible for the severe decrease in the Ivory Gull population in Canada. Other contributing causes could be illegal hunting and changing sea-ice conditions.

‘Bioavailable mercury, transported long distances in the atmosphere from emission sources in Asia, is expected to continue increasing in the Arctic,’ say the team, raising the alarm over future population declines in wildlife, even for those animals that live far from the sources of human pollution.

Covid-19 restrictions during spring 2020 meant many surveyors were unable to visit heronries, causing a break in the long-term monitoring of breeding Grey Herons. More here >