I Predict a Petrel

Rare seabirds are sought-after species by UK birders. Species such as Fea’s/Zino's Petrel are difficult to twitch, and generally, it is a case of being on-site when one happens to pass by. A number of rare seabirds have been tracked moving north or south past a series of English east coast sites in recent years. Perhaps the most famous among these is the Zino’s/Fea’s Petrel tracked moving north past 14 sites on 21st September 2014.

However, when a seabird passes an east-coast site, many birders further north or south are left guessing how long it will take to arrive. For example, a Zino’s/Fea’s Petrel flying north past Spurn on 9th September 2015 prompted several posts on Twitter asking how long the bird might take to arrive at various locations further north. Birders hopeful of connecting with tracked seabirds might be left making hasty calculations that attempt to predict when the bird in question will arrive. Not only might such rushed calculations be inaccurate, they might also waste precious time, fuel and money in travelling to a coastal watch point.

This article aims to provide observers with information regarding when seven species of seabird being observed moving along the north-east English coastline might arrive at sites further along the coast. It may be useful for birders who want to time their arrival to maximise their chances in connecting, as well as birders already present at a site who want to know when they should scan most intensely. 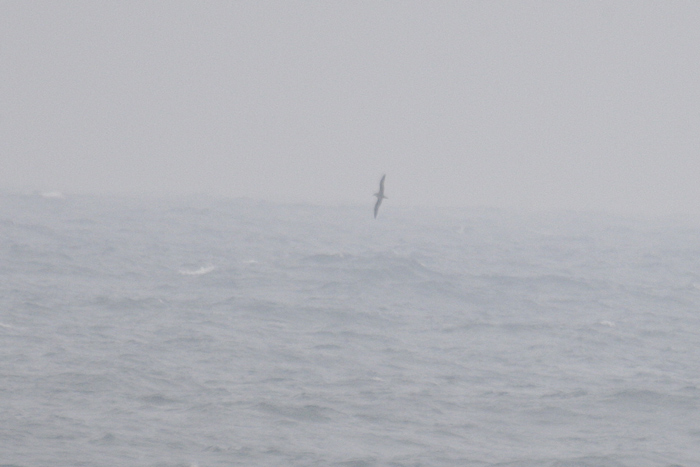 In order to make any kind of predictions, I searched for details of individual seabirds that I am aware have been seen moving north or south past two or more north-east English coast locations. Although it is only assumed that birds relate to same individuals, the rarity of species and the timings of individuals are strongly indicative of particular sightings involving the same individual. I calculated the length of time (hours:mins) it took each seabird to move between each pair of sites. The likely flight path of each seabird was drawn in GIS and is shown in Figure 1. The flight path assumes that seabirds pass by offshore at 1km distance. I calculated the flight speed of each individual seabird (distance between each pair of sites/time it took a seabird to move between each pair of sites). I then calculated the mean flight speed of each species.

I amassed a list of well-known seawatching sites and calculated the distance between each pair of sites. My search for details of seabirds suggested that individual birds are very rarely tracked north of Holy Island (Northumberland) and south of Spurn (East Yorkshire). Therefore, Holy Island and Spurn were used as the extreme northern and southern sites for which predictions were made. I predicted how long it would take each species to move between each pair of sites using its mean speed.

Table 2 provides the predicted travel time for seven seabird species between a number of well known seawatching sites. The mean speeds shown in Table 1 might also aid observers in predicting the arrival time of a seabird from any point on the coast. As an example, say you are seawatching at North Blyth and a Zino’s/Fea’s Petrel has been seen flying north past Whitburn. Calculate distance of North Blyth from Whitburn (about 23.5km) and look at Table 1 to get mean speed of Zino’s/Fea’s Petrel (25.8km/hour). Divide 23.5/25.8 then multiply the result by 60 to predict the arrival time of the petrel, which is about 55 minutes.

Of course there are many variables when it comes to bird movements such as weather conditions, feeding, rest and predation. Using the available data it is not possible to say what factor these have had on the mean speeds.

Birders first began using pagers in 1991, but before this news of rare birds would spread over days or weeks after they were first located. In the last two decades, Rare Bird Alert's pager, website and smartphone services now enable birders to hear of birds within as little as one minute after a bird has been found. Their pager service in particular is well known for working extremely well in coastal areas and the instant alerts as a species is being tracked along the coast gives users the best possibly chance of connecting.

Even with this instant news seawatchers can be left wondering how long it might take seabirds to arrive at their seawatching headland. Hopefully this article takes a step towards allowing birders to predict with greater accuracy the arrival of sought-after seabirds.