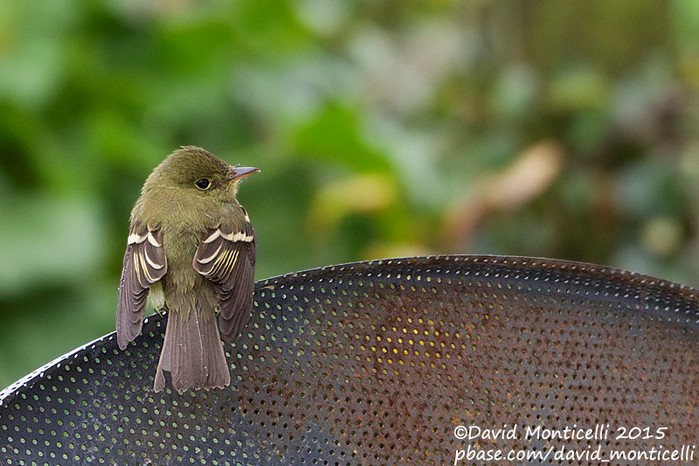 Even before the 22nd of September 2015 had already been a terrific year for mega rarities. Easily twitchable birds such as Great Blue Heron, Cretzschmar’s Bunting, Hudsonian Godwit, Citril Fnch and Moltoni’s Subalpine Warbler meant many have had a number of ticks on their notebooks.

It is safe to say that if there were no other megas available for the remaining 3 months it would still go down as vintage year. However thanks to Kent birder Martin Casemore 100’s of birders left Kent on 22nd September with another superb new bird under their belt. Despite showing a strong suite of features in favour of Acadian Flycatcher the bird was after all an Empidonax flycatcher and so some would have been somewhat nervous about it acceptance as a British first. However now thanks to DNA sequencing any doubts have been quashed as the identification has been confirmed.

Anybody who reads Martin's Plodding Birder blog, will know he is as dedicated a patch worker as they come and also takes some top photographs. Out almost every day, in all weather, in and around the Dungeness area Martin’s hard work paid off in a big way on the morning of the 22nd. Martin takes up the story…

“I had been sea watching from the shelter of the fishing boats at the Point at Dungeness for about an hour where a Red-throated Diver, Balearic Shearwater and few Skuas passing by had kept me interested, even when dodging the frequent heavy showers by sheltering under one of the boats. When yet another heavy shower came through, I reluctantly took shelter under and between the twin hull of the boat, which form a wind tunnel making it nearly as uncomfortable as outside in the rain. The drizzle over the sea reduced the visibility to virtually zero but as I sat staring out into the gloom, a greenish grey passerine flew very low up the beach passing within a few feet of me and then disappeared around the side of the boat. ”

“I glimpsed some wing bars as it went past and my first thought was that it was just another Meadow Pipit coming in off the sea, but it didn’t feel right. I left the shelter of the boat to see if I could find it again and as I came to the back of the boat I saw a passerine fly to the base of one of the fishing net boxes and settle on the shingle. ” 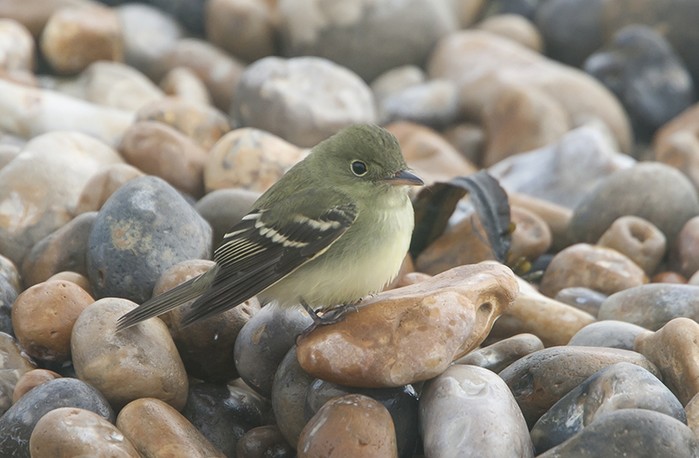 “ I raised my binoculars and stared in total disbelief for a couple of seconds before my brain clicked in, I went to lift my camera, but I’d left it in the dry under the boat, I dashed back the few yards, grabbed it, returned only to find the bird wasn’t there. Fortunately it flitted out from behind a box grabbing an insect and perching just a few yards away. The camera was up and on the bird, the shutter whirring away until the processor couldn’t keep up, the settings were all wrong, I didn’t care I had the record images. ”

“I then got on the mobile and called David Walker praying that I would get a signal and he would answer. He answered and I told him to come to the fishing boats NOW!!! There’s an American Flycatcher at the boats. He arrived within minutes, although it seemed to me waiting for him, to take forever as I tried to keep track of the bird and at the same time call the locals, half of which seemed to frustratingly go to answerphone. ”

“Fortunately the bird showed well on and off for a couple of hours on the beach, though it was very mobile. It did go missing for a while, but was re-found by Jake Everett at Southview Cottage, the home of David & Sheila Bunney where it showed on and off in their garden until dusk allowing about a thousand birders to see it. With the weather improving during the evening and overnight it had unfortunately departed by the following morning. ” 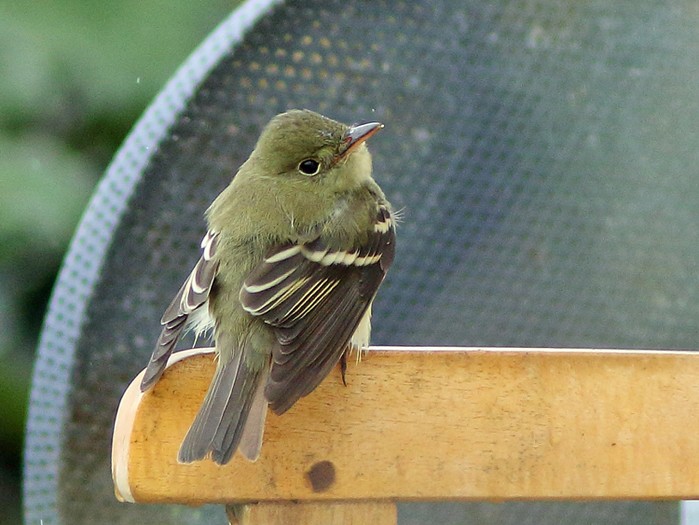 “Tony Greenland brought a North American field guide to site, which enabled the few of us there to narrow the Flycatchers identification to either Acadian or Yellow-bellied Flycatcher. When the Flycatcher went missing David Walker, Gillian Hollamby and myself went back to the observatory. With the aid of the literature there and the images we had taken, we came to the conclusion that it was an Acadian Flycatcher, due to the structure, the long primaries and the longish broad bill. ”

David sent this to BOURC chairman Professor Martin Collinson, a senior lecturer at the University of Aberdeen, who is now the go-to-man when it comes to identification of British rarities using DNA. Martin got to work on the sample and provided some entertaining and teasing tweets during the DNA sampling!

Martin describes the DNA sampling technique and the results.

“When the fecal sample arrived at University of Aberdeen we digested it using enzymes to make a soup of the bird’s DNA and then used a polymerase chain reaction (PCR) reaction to make enough of the mitochondrial DNA for sequencing. The problem with poo samples is that the DNA is rapidly degraded into tiny fragments, so the normal PCRs we use to isolate big pieces of DNA from feathers often do not work, and true to form they did not work for the Dungeness bird. We therefore designed a PCR protocol that would allow us to sequence small fragments of the DNA mitochondrial cytb gene from any Empidonax species. ”

“The sequence we got was fed into the online database of every bird that has ever been sequenced and was identical to 3 of the 4 individuals of Acadian Flycatcher from USA and Mexico that were in there, and 1 base pair different from the fourth bird,. In contrast all other species of Empidonax, including Alder and Willow, were at least 8-9% different. ”

“On this basis, we can say with 100% confidence that the Dungeness bird was genetically an Acadian Flycatcher.”

So there we have it, a great result all round. In his write-up of the find Martin is very matter of fact about how things panned out. However as it turned out the bird was only twitchable for the one day. It is very important to note that the speed at which he got the news out played a huge part in allowing so many people so see this delightful bird. In the same circumstances others may have played it much more safe, got lots locals on site, checked the books etc before releasing the news. At which point it may have been too late for many to get there. It was also invaluable that Martin had managed to get some excellent photos and using his phone could photograph the back of his camera and distribute these images immediately. From these images it was clear this bird was not likely to be another Alder Flycatcher and meant birders could set off.

So all in all a terrific find by one Martin and some top science by another Martin means Britain has it’s first Acadian Flycatcher.

You can read Martin’s excellent Plodding Birder blog here and you can follow him on Twitter here.

And for all things BOURC, avian science, DNA and much more you can follow Martin Collinson on Twitter here.

Jon Dunn brings you a comprehensive roundup of the week's best birds from around Britain, Ireland and the WP, with Tengmalm's Owl again in Shetland, plus much more. More here >