A Year of Firsts: 2016 birding review - Part I: Early Winter

2016 began with four mega rarities lingering from 2015, with the headline bird of New Year's Day 2016 being the Mourning Dove still present since on the Shetland Isles since 26th December 2015. The seventh record for the British Isles of this Nearctic species but the first here in winter and the longest-stayer this first-winter remained a popular attraction in gardens in Lerwick until the weather worsened on 15th January after which it could not be found. Austin Taylor kindly gave us a finders account for this first for the Shetland Isles. 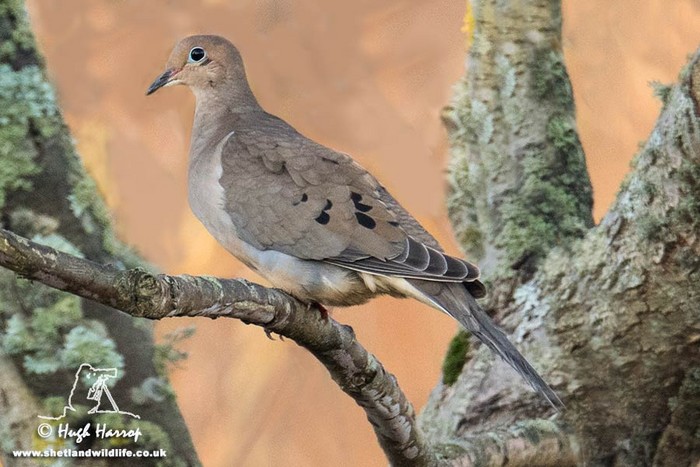 Nearby on the Orkney Isles the Northern Harrier first seen by Mark Warren on North Ronaldsay on 25th September 2015 remained on the island right through the winter until it was last seen on 2nd April 2016. Of at least 13 previous records of Northern Harrier in the British Isles 12 have occurred since 2008 when the second British record was identified, also, on North Ronaldsay on 24th September-3rd October . The 2015 bird - an adult male - was the first to be seen here after the status of the form was upgraded to species level by the British Ornithologists' Union. 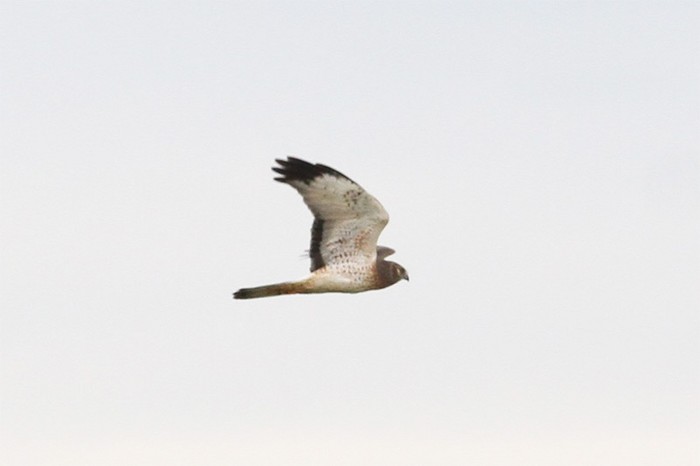 In Cornwall one of the two regular wintering Pacific Divers remained into 2016, that residing in Mount's Bay since it had returned on 26th November, after having first been seen at Penzance on 17th February 2007 and noted most winters since. The other regular Pacific Diver in Cornwall was not seen in early 2016 despite still being present at Maenporth on 30th-31st December 2015, it having first reported at Porthpean on 10th December 2007. In Ireland the returning Pacific Diver was again in County Galway visiting Galway Bay between 5th January and 14th February 2016 having been found at Tawin on 12th January 2009. 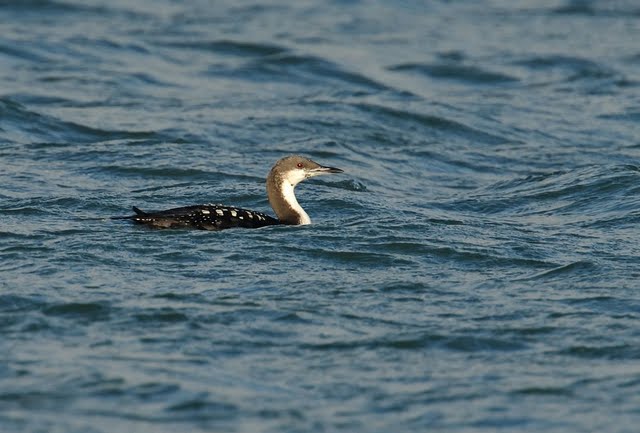 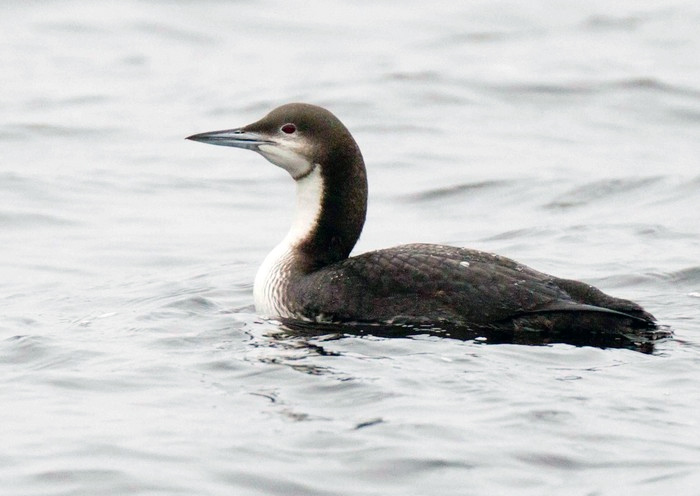 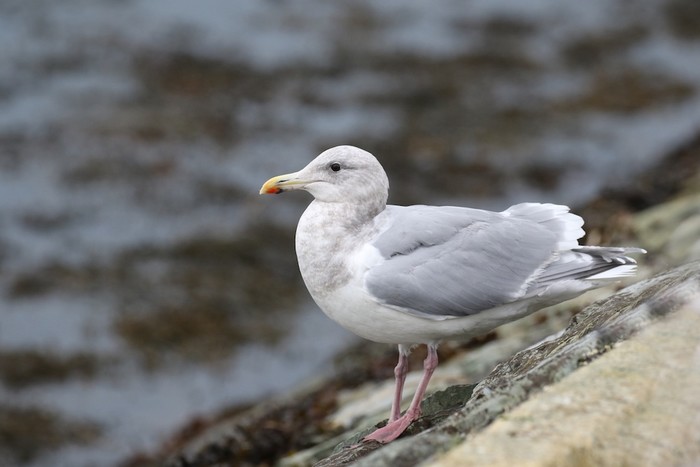 The first first of 2016 was discovered on 2nd January by Fionn Moore, a Glaucous-winged Gull in County Cork at Castletownebere - the first Irish record.

The colour of the grey primary tips of this individual being a darker shade than the mantle caused some to question the purity of the bird - especially as Glaucous-winged Gull is renowned to hybridise with Western Gull, American Herring Gull and Glaucous Gull on the Pacific coast of North America - but this bird is matched by pure Glaucous-winged Gulls in Japan at least, where the incidence of hybridisation in large gulls is less.

As a national first it was inevitably popular with all Irish twitchers, but as it lingered in Castletownbere until 2nd May it also attracted Western Palearctic listers who had not connected with previous records. 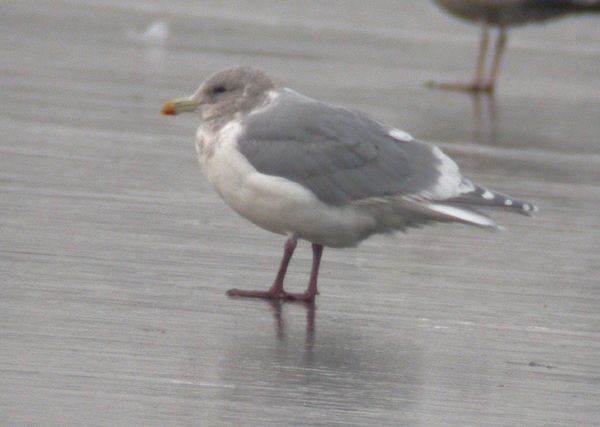 Another mega-rarity on the Orkney Isles was a Brünnich's Guillemot found by Keith Hague at Scapa Pier, Mainland on 8th-12th January. Although not the most-wanted rarity that it was before the confiding bird lingered in Dorset at Portland Harbour between 19th-31st December 2013, prior to which the most recently twitchable birds were on the Shetland Isles in 2005 and 1995, with the later bird only being seen as it was in care. 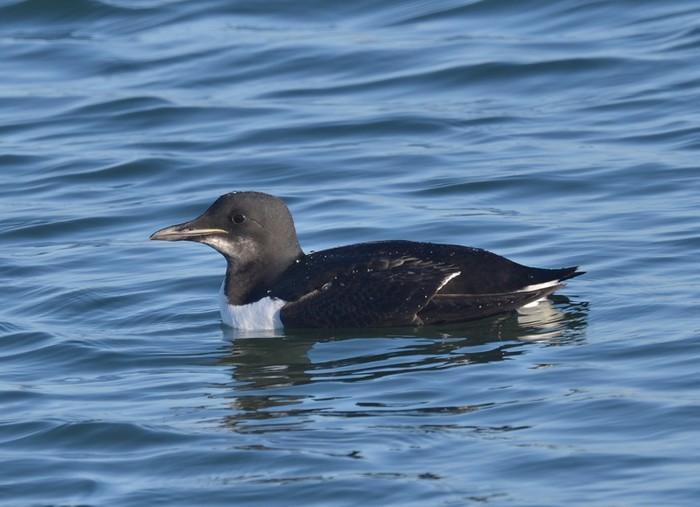 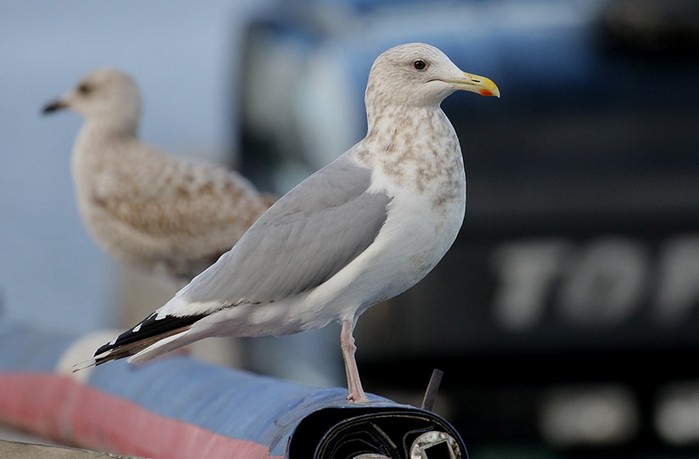 The second 'first' of 2016 was another gull, also discovered in southern Ireland but was also a first for the Western Palearctic.

Separating County Wexford from County Waterford, the Barrow Estuary host high densities of sprats during the winter months, and these in turn attract large numbers of predators, including all the expected gulls accompanied by small numbers of Glaucous, Iceland, Ring-billed and Caspian Gulls, and - towards the open sea - Fin Whales, and even Humpback Whale.

Diligent scrutiny of the massed gull flocks around the fishing village of Duncannon by leading birder Killian Mullarney led to the location of the Vega Gull on 10th January.

An incredible find that would no doubt have been over-looked by all but the keenest gull-watcher, the best pointers to the location and identification as adult Vega Gull are the combination of a dark (not pale) eye, the winter head pattern is more 'netted' than streaked, black on P4, and on this late date that it is still to finish it's complete post-breeding moult, with the outermost primary retained from the previous moult cycle; such late moult is not typical of European gulls.

Although present over four days, the bird proved frustratingly difficult to twitch. Due to the complex nature of the identification and enormity of the claim, the initial news of the bird was understandably cautious, with confirmation of the identification not coming until the morning of the 11th January. Some of the keenest Irish twitchers saw the bird on 11th when it lingered around the small pier until late in the morning before being lost to view. A contingent of British twitchers arrived for dawn the following day but were unable to relocate the bird by dusk, and of them only Steve Gantlett and Neil Alford stayed overnight to be rewarded by the reappearance of the Vega Gull on 13th. As if this wasn't frustrating enough for those who had dipped out on the 12th, many then made a return journey to Duncannon on 14th but to no avail, and some even continued to search the area until the 17th January, but still without success. 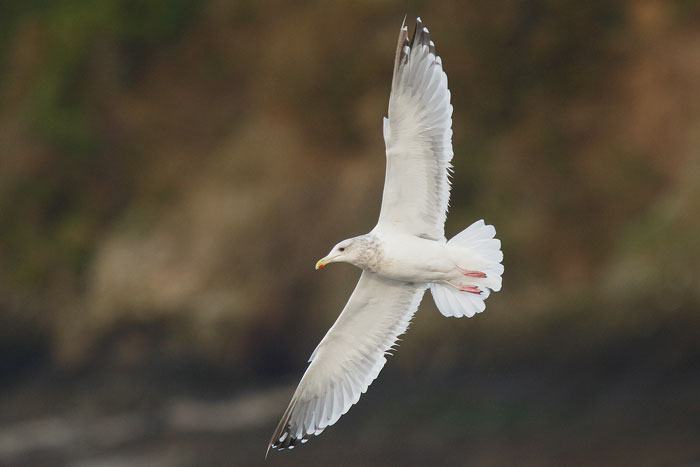 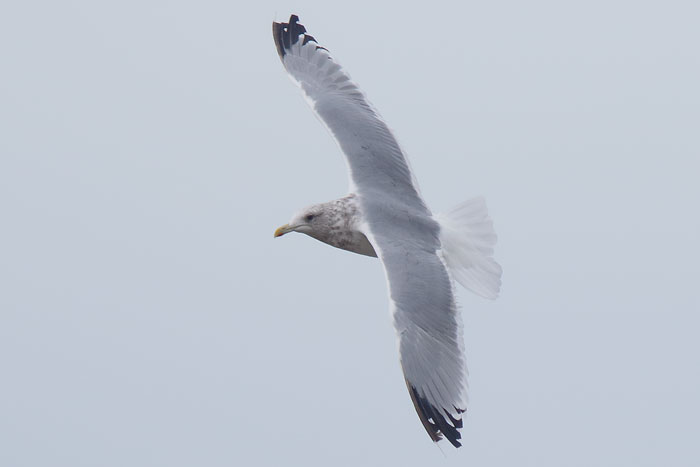 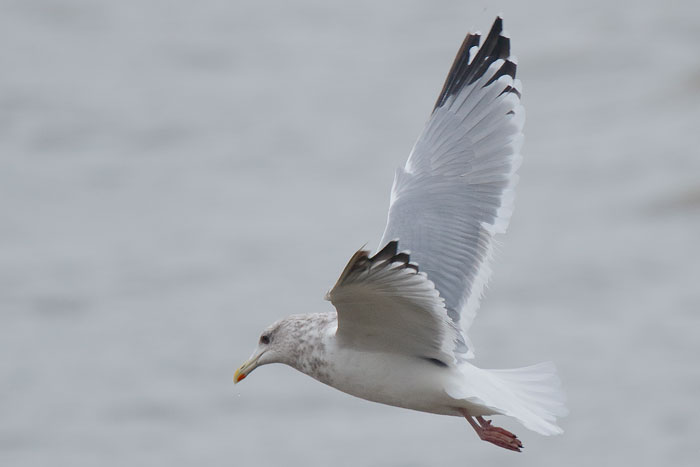 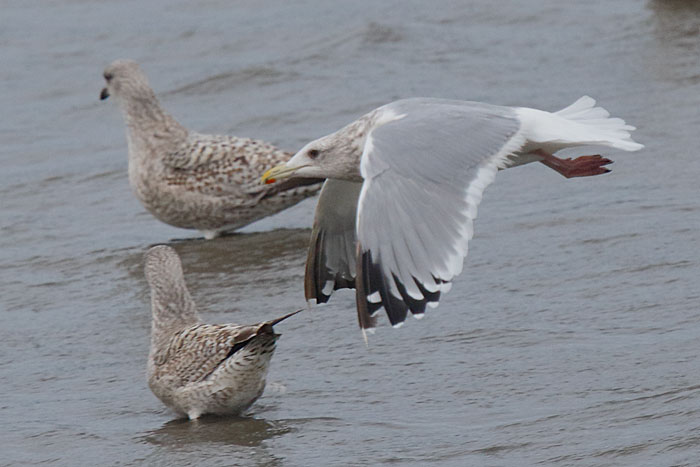 Remarkably, later in 2016 a second Vega Gull - again an adult - was located in the Western Palearctic, in northern France, inland, in Seine-et-Marne at Charny on 17th November, with this record discussed here .

Breeding in the Siberian Arctic west to the Taymyr - reaching to roughly 100° east - and wintering along western seaboard of the Pacific Ocean, European birders are most familiar with this bird from visits to Japan and South Korea, where it winters alongside both Slaty-backed Gull and Glaucous-winged Gull; both species that have been discovered on multiple occasions in Europe since the mid 2000s. 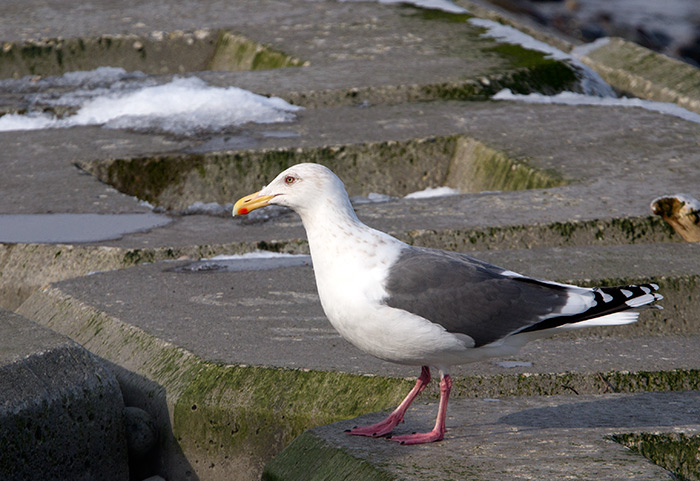 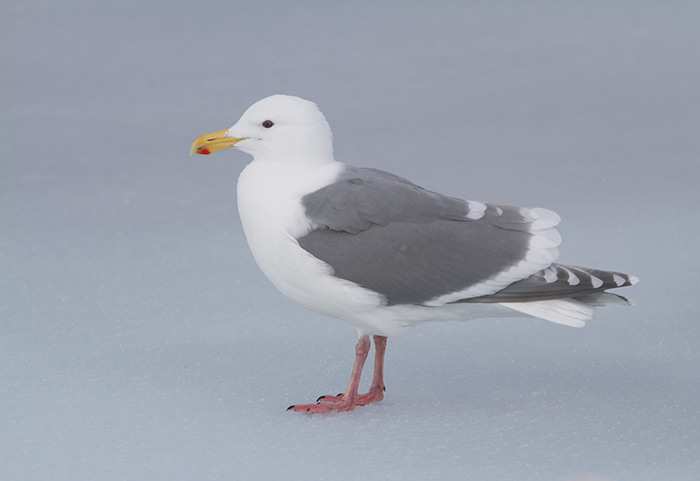 With this upturn in the occurrence of Pacific gulls in Europe, coupled with the now greater awareness of the characteristics of Vega Gull, more will surely be discovered here.

Currently, the taxonomic position of Vega Gull is not unanimous, for example, being treated as a full species Larus vegae by the International Ornithological Committee (IOC) and Dutch Birding Association (DBA), although as a form of American Herring Gull Larus smithsonianus vegae by the British Ornithologists' Union (BOU) and BirdLife International/Handbook of the Bird of the World (and there under the species name of Arctic Herring Gull), but as a form of Herring Gull Larus argentatus vegae by Clements Checklist and the American Ornithologists' Union (AOU). In August 2016 the British Ornithologists' Union announced that it had disbanded it's Taxonomic Sub-committee and has yet to announce with authority to follow, whilst the Irish Rare Birds Committee announced in 2004) that Vega Gull would be treated as a full species in Ireland following the Association of European Rarities Committee (AERC) Progress Report published in December 2003.

Whilst Gyr is an annual vagrant it is invariably only seen briefly and thwart any attempt to chase them. Gyr is also regular on the Western Isles and so a white morph on South Uist on 6th December 2015 was to be expected, however, when what was presumably the same bird reappeared on North Uist on 21st December 2015 a lengthy stay on that island began and from 15th March-9th April this juvenile bird lingered at Balranald, was confiding and was widely twitched. 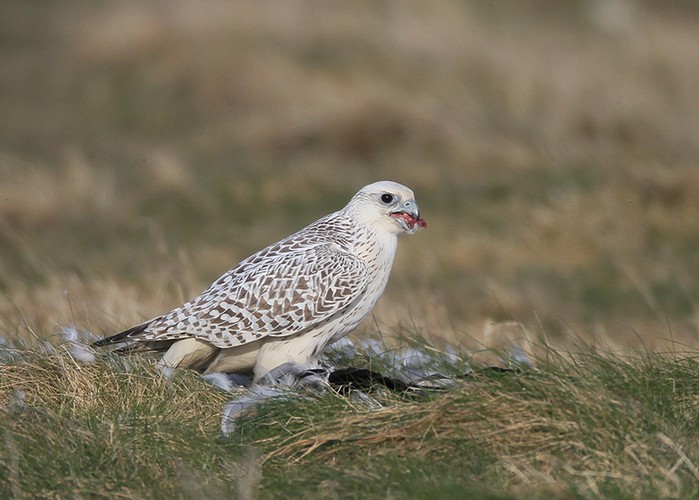 A Thayer's Gull in Suffolk on 27th -28th March was a great find for gull enthusiast Brian Small. Although the identification was not confirmed until the evening of 27th March and although present the bird proved elusive in inclement weather on 28th March so was not so well-watched.

Although reasonably regular in Ireland since 1990 there remains only two accepted records in Britain: an adult in Essex at Pitsea on 6th November 2010 and a juvenile in Lincolnshire at Elsham 3rd-19th April 2012. With the recent disbanding by the British Ornithologists' Union of the BOURC Taxonomic Subcommittee (TSC) and the full species status granted to Thayer's Gull by BirdLife, the next will be popular 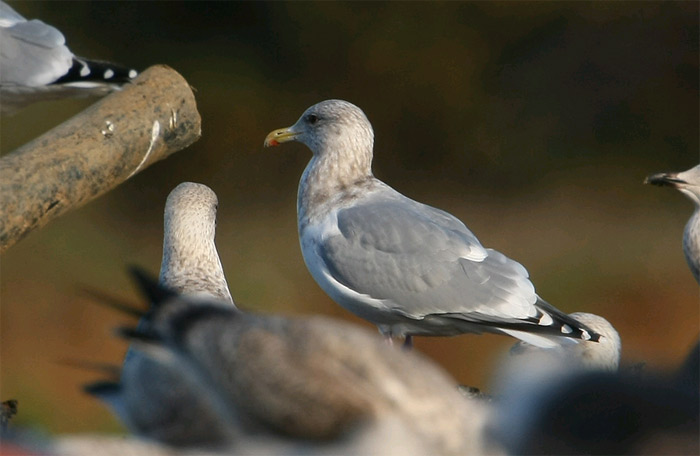 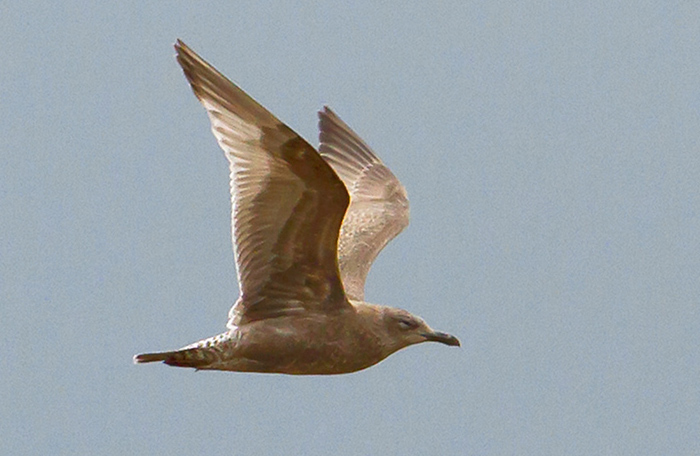 On 18th February a wintering Western Rufous Turtle Dove - Rufous Turtle Dove of the form meena - was discovered in Kent at Otford by Tony Rose although the true identity was not suspected by the finder. After the true identity of the bird was realised from photographs and the precise location of the bird was ascertained the twitch did not commence until 30th April, although luckily this popular bird remained until 12th May. The whole occurrence mirrored the successful twitch for the Oriental Turtle Dove - Rufous Turtle Dove of the nominate form orientalis - in Chipping Norton, Oxfordshire, found on 15th-18th December 2010 but not becoming twitchable until it was relocated elsewhere in the town on 12th February-9th May 2011. 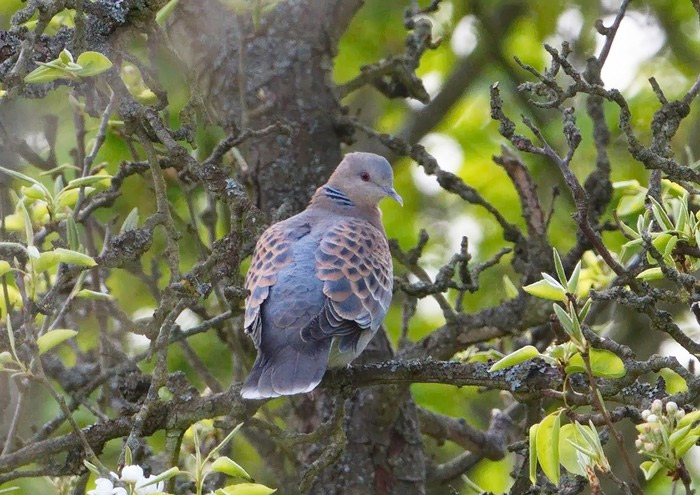 Ducks in the Southern U.S. have shifted northward due to climate change

A new study shows patterns uncovered by community scientists over 50 years have repercussions for both wildlife and people. More here >