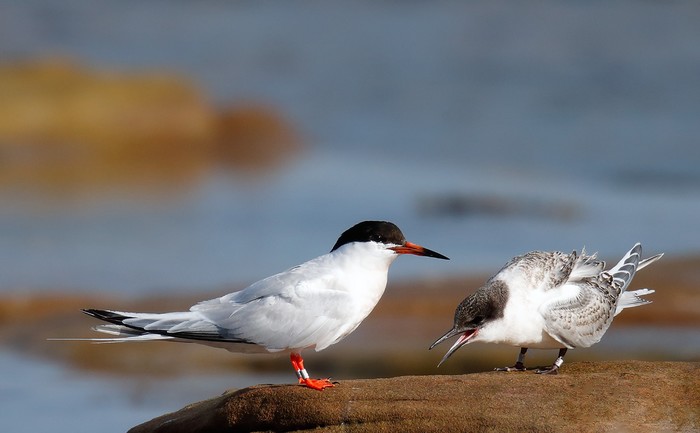 Currently in 2018, there are only 116 breeding pairs of Roseate terns in the UK, restricted to just Coquet Island in England
(© Tony Davison / www.tonydavisonphotography.com)

RSPB Cymru have announced that two Roseate Tern chicks were born at The Skerries this summer – with one chick having successfully flown the nest for the first time since 2006.

Funding provided by the EU Roseate Tern Recovery Project allowed for a two-week extension on the islands’ wardening season, along with newly designed nest boxes being placed strategically around the islands. The wardens also placed lures playing Roseate Tern calls and hand-made decoys with the aim of attracting passing Roseate Terns to the colony.

Once widespread across Wales, Roseate Terns nearly became extinct in the 19th century because their plumage was prized for fashionable hats. Sadly, Roseate Terns continue to face many challenges, including food shortages, eroding nesting habitat and predation. To address this challenge, 2015 saw the launch of an ambitious five year EU-funded Roseate Tern LIFE Recovery Project bringing together conservationists from the RSPB, BirdWatch Ireland and North Wales Wildlife Trust on the three breeding colonies (two in Ireland and one in the UK). The project is also focused on creating further Roseate Tern-friendly sites across the UK and Ireland in the hopes of re-establishing thriving colonies.

Currently in 2018, there are only 116 breeding pairs of Roseate Terns in the UK, restricted to just Coquet Island in England. With their incredibly pale plumage with slight rosy flush and long tail streamers, they are considered the most elegant of the five breeding terns to visit our shores. These endangered birds migrate each spring from western Africa to breed at only a handful of colonies in the UK and Ireland.

The Skerries are a group of small rocky islets which lie just off the northwest corner of Anglesey. Due to its sparse vegetation and rough terrain, it is inhospitable to humans; however, the islands are an important sanctuary for breeding seabirds. The Skerries are particularly significant for breeding terns, supporting the largest Arctic tern colony in the UK. During the summer, the islands are also home to breeding puffins, herring gulls, lesser and great black-backed gulls.

Roseate Tern LIFE Recovery Project Manager, Daniel Piec, said: “We’re ecstatic with news of Roseate Terns returning to breed on The Skerries. The work undertaken on the islands over previous years has been key to attracting them back. Thanks to the LIFE funding we are able to extend the wardening season to make sure that the chicks from this Roseate Tern pair will successfully fledge, making it the first time on these islands since 2006.”

RSPB Cymru Warden, Ian Sims, said: “The RSPB, with added financial support from Natural Resource Wales, have been working to protect the seabirds on the Skerries for many years and when it comes to breeding Roseate Terns, they have quite a variable history. In 2016 one pair bred but did not fledge any young. Before that they last bred in 2006 – when a pair fledged one chick. Whilst in 2003, two pairs bred but failed to fledge any young. Nevertheless, this news cannot be overstated – especially given staff efforts over recent years. Yet, this wasn’t the only good news story to hit the islands this summer. We also saw dramatic increase in Arctic terns, with an estimated 600-700 more pairs compared to 2017 – an overall increase of 20%. With this we are optimistic of attracting more terns in the future.”

Jon Dunn rounds up an excellent week for rare and scarce bird across Britain, Iraland and the Western Palearctic. More here >

Electrocuted in Turkey: Vultures and other soaring birds under threat

Hazardous power lines are among the main threats for vultures, raptors and many other bird species in Turkey. Imperial Eagles, Saker Falcons and White Storks. More here >