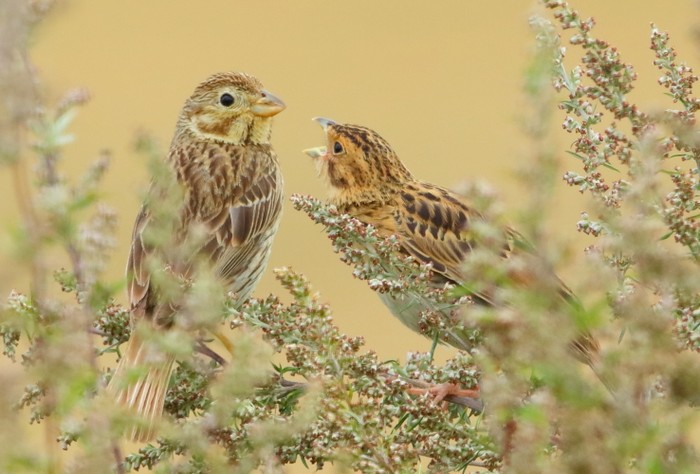 The hard work of local farmers and estates in Angus and the East Neuk of Fife has been heralded as the reason behind the continued improvement of the fortunes of Corn Buntings.

This year’s survey results, which were announced by RSPB Scotland, revealed that last year’s record increase in Corn Bunting territories in Fife has been broken. While predictions that 2017 would be a good year for Corn Buntings in Angus have proved correct.

RSPB Scotland have praised the dedication, passion and commitment of all those involved in the Corn Bunting Recovery Project. Yvonne Stephan is a Conservation Advisor for RSPB Scotland and helps run the Project. She said: “This record breaking increase of Corn Buntings is just absolutely amazing! I wouldn’t have dared to dream of such fantastic results in such a short period of time and it’s extremely encouraging that the Corn Bunting management is working that well. It shows what a difference the joint efforts and commitment of all the wonderful people on this project makes.”

This continued good news comes after decades of dramatic declines for the UK Corn Bunting population. In Eastern Scotland numbers fell by 83% between 1989 and 2007, earning them the unfortunate accolade of being one of the fastest declining birds in Scotland.

Farmers and land managers are using a combination of agri-environment scheme options, voluntary action and upgraded greening measures to help make the future of this iconic bird in Scotland more secure.

34 farms as well as the East Neuk Estates Group are currently involved in the Corn Bunting Recovery Project in two of the last Corn Bunting strongholds in Scotland and more farmers are expected to take action as the project is expanding to the North East.

Peter Peddie is one of the Fife farmers involved in the project. He said: “We were just absolutely delighted (by the results). Knowing what a difference our work makes, encourages us to keep on going.”

Allen Innes, from West Seaton Farm in Angus, added: “We are very happy to be part of something which is increasing wildlife and birds in the area and we are very pleased that Corn Bunting numbers are increasing.”

Johanna Willi is the Biodiversity Co-ordinator for Fife Council. She said: “The dedication and commitment of the farmers, estates and land managers has been exceptional, and it is so heartening to see that our joint efforts can make a real difference to a threatened species. This year’s results are an exciting development in the fortunes of the Corn Bunting and worth celebrating – well done to everyone involved in this fantastic achievement.”

They were joined in 2017 by The Links Trust as well as the Kingsbarns and Fairmont golf courses. In addition, local schools and communities have joined forces to help this rare farmland bird including school children in the East Neuk of Fife, who planted giant bird tables to provide food for Corn Buntings as well as yellowhammers, tree sparrows and skylarks over the winter. After learning about the plight of the ‘fat bird of the barley’, Pittenweem Primary School also created special Corn Bunting artwork with artist Susan Winton, which proved to be one of the highlights of the Pittenweem Arts Festival earlier this year and helped to raise awareness of the struggle Corn Buntings face as well.

Everyone involved in the project is helping to ensure a sustainable recovery of the species.

Yvonne added: “The future for Corn Buntings in Scotland is looking better all the time, but none of it would be possible without the help and commitment of the local farmers, estates and landowners and the support of Scottish Natural Heritage. On behalf of Corn Buntings in east Scotland, I would like to say thank you to all of them!”

Jon Dunn brings you his weekly look back at the best birds from around Britain, Ireland and the Western Palearctic. More here >

Biden administration must act fast to save migratory birds

The new Biden administration has until 4th Feb to overturn changes made by Donald Trump just before he left office. More here >