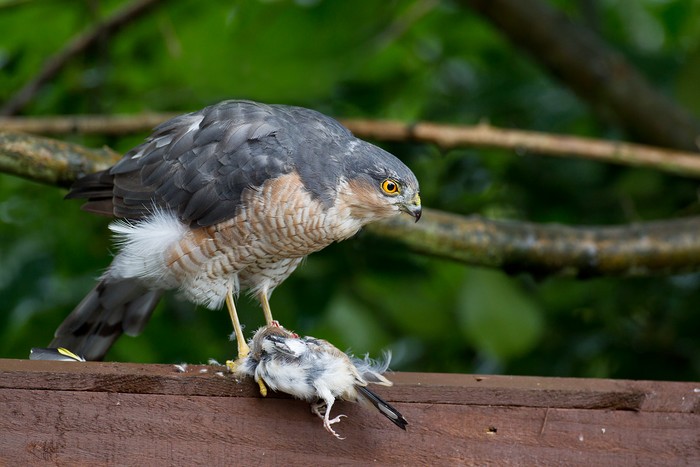 In the first of its kind study on these raptors, researchers from RSPB Scotland and the Scottish Raptor Study Group examined differences between populations of the birds in Edinburgh and in the Ayrshire countryside over four years from 2009 to 2012.

They found that territories in the urban environment (Edinburgh) were occupied far more frequently than those in the rural study area (Ayrshire) and that the city hawks also had significantly higher breeding success than the country hawks.

Of the twenty breeding attempts that failed, only two were recorded in the urban study area, the rest in the rural. The number of nest desertions was also much higher in the latter. It was this complete failure of numerous nests that caused lower breeding success in the rural Sparrowhawk population.

In total, 195 Sparrowhawk pairs were located in the two study areas across 117 separate sites or ‘territories’. The paper has been published in the journal Écoscience.

Michael Thornton, lead author of the paper and member of the Lothian & Borders Raptor Study Group, said: "This study clearly shows that urban green spaces, such as parks, gardens and golf courses provide both suitable nest sites and an abundance of prey species to support high breeding success in this charismatic predator, and it is important that we protect these areas for urban wildlife and for our own health and wellbeing."

A Sparrowhawk defending a kill from a Magpie (© Gaz Robinson)

Staffan Roos, Senior Conservation Scientist with RSPB Scotland and one of the authors of the paper, said: “Urban environments offer a huge variety in quantity and quality of natural habitats, particularly for bird species such as house sparrows, starlings, oystercatchers and, as this study shows, Sparrowhawks.

“The availability of food appears to have played an important role in the differences observed between Sparrowhawks living in the city and those in the countryside. Gardens and parks hold large numbers of songbirds, which these raptors feed on, and the structure of urban landscapes in Edinburgh and other European cities, with parks and woodlands right next to private gardens, provides an ideal hunting environment for Sparrowhawks.

“We would like to see further studies carried out, with nests being monitored by camera, to learn more about the impacts of food abundance on these birds in different parts of Scotland. The more we know about various wildlife species, the more we can do to protect and conserve them in future.”

Sparrowhawks were one of the first raptors to colonise urban areas in Europe, in the UK this happened in the 1980s. The European Sparrowhawk population is estimated to be up to 582,000 pairs with the UK holding around 35,000 pairs, 12,000 of those in Scotland.