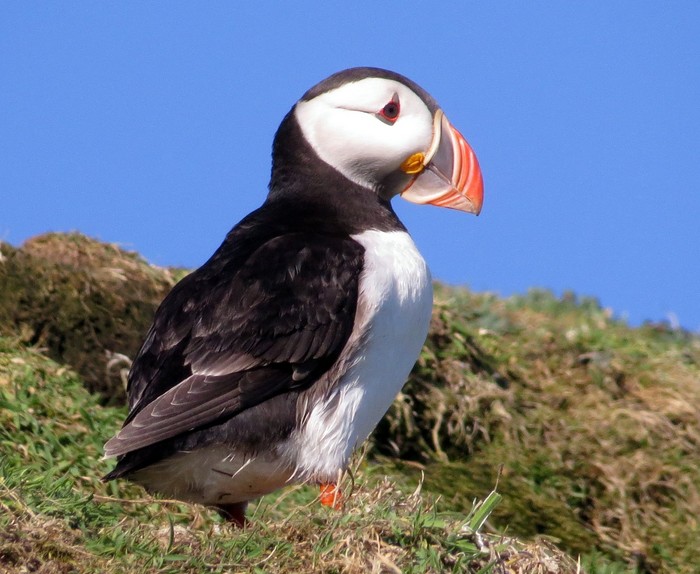 The RSPB’s Project Puffin has taken the first steps in solving the mystery of why some Puffin colonies in the UK are in dramatic decline after scientists analysed more than 1400 photos sent in by the public, helping them to build a better picture of what these seabirds are feeding their chicks.

UK coastlines have come alive each spring with the sight, sound and smell of Puffins nesting and raising their young, known as pufflings. With their bright orange bills and distinctive eye markings people from around the world visit Puffin hotspots in the UK and Ireland to photograph the bustling colonies. However, in recent years Puffin numbers have plummeted at some colonies, and experts estimate that without help more than half the global Puffin population will disappear within the next forty years.

In the summer RSPB scientists set out to understand more about the differing fortunes of Puffins around our coasts. The project aimed to capture a snapshot of what Puffins are feeding their young at as many colonies as possible, as it is thought their food supply has been negatively impacted by warming seas and shifting ocean currents. By enlisting the help of the public, also known as the ‘Puffarazzi’, 1402 photos of Puffins bringing food to their chicks were sent to the team.

The photos have helped scientists identify areas where Puffins are struggling to find the large, nutritious fish needed to support their chicks. Early results suggest that the diet of Puffins vary significantly around the UK - in the northern isles of Orkney and Shetland, where serious Puffin declines have been seen, Puffins appear to be consistently finding smaller prey compared to most other colonies.

Traditionally Puffins feed on a mixture of fish, but with nutritious sandeels making up a high proportion of their diet. The photos from Puffin colonies in northwest Scotland show that sandeels are making up about half of their diet compared to the two-thirds at colonies in southern Scotland, northern England and Wales.

Ellie Owen, RSPB Conservation Scientist leading the Project Puffin team, said: “Puffins colourful bills and unique eye markings make them a favourite bird to photograph. The huge response to our appeal for photos has been incredible, with more than a thousand submitted. It’s taken the team of staff and volunteers more than three months to go through them all.

“For a young Puffin waiting in its burrow, its life hangs on whether its parents return with enough food. An abundant supply of large, nutritious fish such as sandeels, sprats and herrings is key to healthy colonies. The public response means we’re getting data on a scale that we’ve never been able to collect before; showing what Puffins are managing to find to feed their chicks around our coastline. The next stage of the project is to look more closely at the diet of Puffins compared to their breeding success to pin down what part diet plays in the decline of some Puffins.”

From May to August, 602 people joined the Puffarazzi, gathering 1402 photos of Puffins taking food to their chicks. Pictures came from almost 40 colonies around the UK, including those on the Farne Islands, Skomer and the Isle of May. The project is supported by Heritage Lottery Fund Scotland thanks to money raised by National Lottery players. To see more of the pictures and to learn about the RSPB’s Project Puffin, visit www.rspb.org.uk/projectPuffin