Northern Pintails caught in caught in an ecological trap 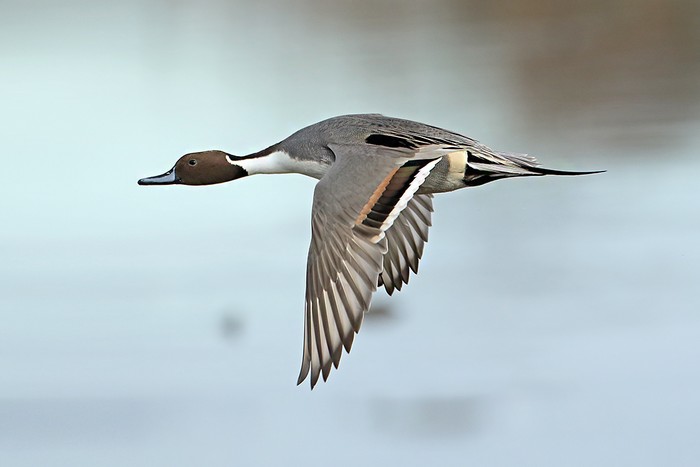 Pintails are not thriving like other species of dabbling ducks, and researchers think that's because they are being “misled” by modern cropping methods and climate change into choosing risky nesting habitat, resulting in nest failures from predation and agricultural practices. (© Gary Thoburn)

After a severe drought gripped the Prairie Pothole Region of the U.S. and Canada in the 1980s, populations of almost all dabbling duck species that breed there have recovered. But not Northern Pintails. Now, a new study by a team of researchers suggests why—they have been caught in an ecological trap.

The Prairie Pothole region straddles the U.S.- Canada border and sprawls from central Iowa in the south to Alberta in the north, covering a large swath of Minnesota, South Dakota, North Dakota, Manitoba and Saskatchewan in between.

"With increasing cropland cover in the region, pintails have been selecting for cropland over scarce alternative nesting habitat, probably because it is similar to the native mixed-grass prairie they evolved to nest in," said lead researcher Frances Buderman, Penn State. "That behaviour results in fewer pintails the following year due to nest failures from predation and agricultural practices."

The U.S. Fish and Wildlife Service's North American Waterfowl Management Plan calls for more than 4 million pintails, but recent estimates are only half of that. The reason pintails are not thriving like other dabbling ducks, according to Buderman, assistant professor of quantitative wildlife ecology in the College of Agricultural Sciences, is that they are being "misled" by modern cropping methods and climate change into choosing risky nesting habitat.

Also called puddle ducks, dabbling ducks frequent shallow waters such as flooded fields and marshes. They feed by tipping up rather than diving. There are 38 species of dabbling ducks—they float high in the water and are swift fliers.

Pintails are one of 38 species of dabbling ducks, also known as puddle ducks. They frequent shallow waters such as flooded fields and marshes, and they feed by tipping up rather than diving. They float high in the water and are swift fliers. Credit: . Greenslade-Delta Waterfowl

By their very nature, pintails may be vulnerable to the ecological trap, Buderman explained. Despite being an early-spring nester—a quality that typically would allow for reproductive "plasticity" to climatic conditions—pintails have demonstrated inflexible breeding behaviour, such as being unwilling or unable to delay nest initiation and being less likely to renest than most other waterfowl.

"Inflexible breeding behaviour may result in greater vulnerability to unpredictable weather events and changes in climactic conditions," she said. And given their preference for nesting among landscapes of grass-like, low-lying cover, pintails readily nest in fields of stubble in untilled agricultural fields. "Unlike other ducks that generally avoid nesting in stubble, pintails in the Prairie Pothole Region commonly select crop stubble nest sites and often select it over remnant patches of grass and other cover."

Pintails often initiate nests before remaining stubble fields are worked by farmers in the spring, making nests vulnerable to mechanical spring tilling and planting of remaining standing stubble, Buderman explained. That can destroy a large percentage of initial nests. Exacerbating the effect of pintail selections over time, the amount of land in the Prairie Pothole Region annually tilled for spring-seeded crops has increased by approximately 34% since 1959.

Dabbling duck incoming
Another factor that is contributing to pintails' decline, researchers contend, is a trend in some areas of the Prairie Pothole Region to manipulate drainage to consolidate surface water into larger and deeper wetlands that dry out less frequently and have more surface-water connections to other wetlands.

For reasons not clearly understood by wildlife scientists, pintails appear to be particularly sensitive to changes in the number of productive, small wetlands that have occurred across the Prairie Pothole Region. Credit: F. Greenslade-Delta Waterfowl

Those drainage practices make mowing around ponds easier for farmers, and most waterfowl species have coped thus far, but it hasn't been good for pintails. Wildlife scientists suspect the birds need the smaller, shallower, ephemeral ponds with which they evolved. For reasons not clearly understood, pintails appear to be particularly sensitive to changes in the number of productive, small wetlands that have occurred across the Prairie Pothole Region.

Buderman pointed out that funding partner Delta Waterfowl is working hard to restore these valuable seasonal wetlands on the U.S. side of the region by establishing a Working Wetlands program in the U.S. Department of Agriculture via the federal farm bill.

To reach their conclusions, researchers used more than 60 years of data from the U.S. Fish and Wildlife Service and the Canadian Wildlife Service, which have monitored spring population sizes for North American waterfowl since 1955. They published their results in the Journal of Animal Ecology,

That information is organized into regions that reflect both habitat differences and political boundaries. For many decades, waterfowl have been counted on both sides of the border by aerial crews flying fixed-wing aircraft along established transect lines at low altitude, while simultaneously, ground counts are conducted at ponds on a subset of air-surveyed areas.

To analyse population dynamics, researchers developed a complex model to deal with a huge dataset that took days to run on a powerful computer, which calculated a "breeding pintail count" for the survey period. The mode, which also took into account precipitation, climatic conditions during the breeding season and pond dynamics - allowed researchers to identify the relative influence of long-term changes in climate and land use on both the selection and quality of habitat for pintails in the Prairie Pothole Region.

In just 10 years the species has under gone a remarkable change in fortunes. More here >

Fifteen Griffon Vultures found dead in a well in Morocco

The birds were found near Asilah in Northern Morocco and other birds found nearby were rescued. More here >