The latest report on the UK’s breeding birds shows that one of Wales’ most familiar birds is in trouble. How do we know? In 2019, skilled, dedicated volunteers walked towns, cities, farmland, woodlands, mountains and everything in-between to collect invaluable data from 324 1-km survey squares as part of the Breeding Bird Survey (BBS). 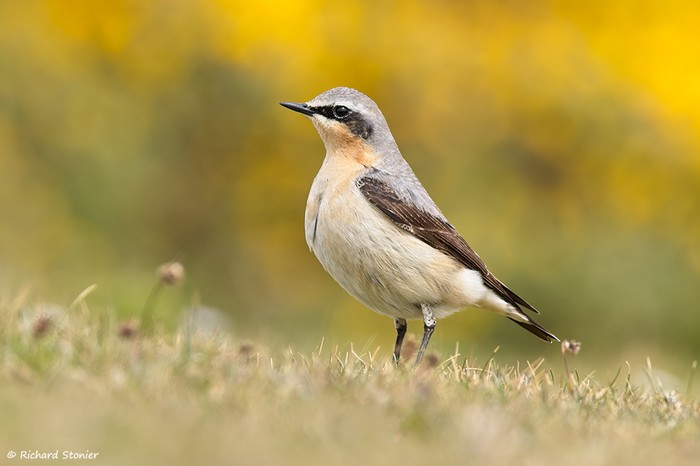 During the surveys, information on bird numbers, habitat types and mammal data were recorded and, in turn, used to produce population trends – the news is mixed.

The Greenfinch is a well-known bird in Wales, being a frequent visitor to garden feeding stations but how much longer might this be the case? The 2019 BBS results show an alarming decline; during the last 23 years, the Greenfinch population has fallen by 71% due to a parasite that causes a disease known as trichomonosis.

Transmission between birds can be via contaminated food and water, e.g. at garden feeding stations. Good feeding station hygiene, with regular cleaning and disinfecting can help to slow the spread. The Trichomonas gallinae parasite is a parasite of birds and does not pose a health risk to humans or their mammalian pets.

The Wheatear is another widespread breeding bird of the Welsh uplands but it too is in trouble, its numbers falling by 48% between 1995 and 2018. The Wheatear is a summer visitor to Wales, spending the winter months in sub-Saharan Africa. As a group, our long-distance summer visitors are showing some of the greatest declines and it might be that they are facing as yet unknown pressure on their journeys south and in their winter quarters, as well as here in the UK.

However, it’s not all bad news, the report shows that two woodland birds are also doing very well in Wales, the Great Spotted Woodpecker and the Blackcap have seen huge increases, up by 189% and 143% respectively between 1995 and 2018.

In Wales, it is possible to monitor the population changes for 60 bird species and it is all thanks to the dedication of the BBS volunteers who go out every spring to survey Welsh birdlife.

Kelvin Jones, Development Coordinator, BTO Cymru, said, “I am always amazed by the power of citizen science and the difference the observations from people that give up their time to collect them can make. The Greenfinch is still found across the UK and you might be forgiven for thinking nothing is amiss, but as the BBS shows, nothing could be further from the truth - thanks to all those who take part we are able to keep an eye out for birds like the Greenfinch and Wheatear."

Julian Hughes, RSPB’s Head of Species, said “The BBS is an essential healthcheck on the state of birds in Wales, so we are hugely grateful to the nation’s birdwatchers who do the counts. The results shape our priority research and conservation work, and our call on others to respond to the climate and ecological emergencies. Wheatears are a part of a summer’s day for upland farmers and hill walkers that it’s shocking to know that numbers have halved. It’s another part of nature that needs our help.”

The BTO/JNCC/RSPB Breeding Bird Survey is a partnership jointly funded by the BTO, RSPB and JNCC, and the report is published by BTO annually on behalf of the partnership.

The full report can be accessed here