Extremely acute vision and the ability to rapidly process different visual impressions -- these two factors are crucial when a peregrine falcon bears down on its prey at a speed that easily matches that of a Formula 1 racing car: over 350 kilometres per hour. 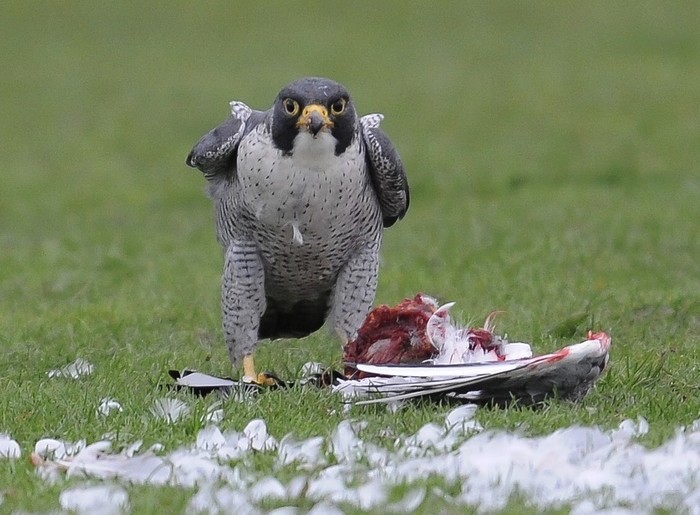 The visual acuity of birds of prey has been studied extensively and shows the vision of some large eagles and vultures is twice as acute as that of humans. On the other hand, up to now researchers have never studied the speed of vision among birds of prey, i.e. how fast they sense visual impressions.

"This is the first time. My colleague Simon Potier and I have examined the peregrine falcon, saker falcon and Harris's hawk and measured how fast light can blink for these species to still register the blinks," says Almut Kelber, professor at the Department of Biology, Lund University.

The results show that the peregrine falcon has the fastest vision and can register 129 Hz (blinks per second) provided the light intensity is high. Under the same conditions, the saker falcon can see 102 Hz and the Harris's hawk 77 Hz. By comparison, humans see a maximum of 50-60 Hz. At the cinema, a speed of 25 images per second is sufficient for us to perceive it as film, and not as a series of still images.

The speed at which the different birds of prey process visual impressions corresponds with the needs they have when hunting: the peregrine falcon hunts fast-flying birds, whereas the Harris's hawk hunts small, slower mammals on the ground.

Even though the vision speed of birds of prey has never been measured before, there are studies about the speed at which small insect-eating birds such as flycatchers and blue tits can take in visual impressions.

"They also have fast vision. Therefore, we draw the conclusion that bird species that hunt prey that flies fast have the fastest vision. Evolution has provided them with the ability because they need it," says Almut Kelber.

"It is something of a competition. A fly flies quite fast and has fast vision, therefore the flycatcher must see the fly quickly in order to catch it. The same applies to the falcon. To capture a flycatcher, the falcon must detect its prey sufficiently early in order to have time to react," says Simon Potier.

The researchers hope that the new knowledge can hopefully contribute to better conditions for birds held in captivity.